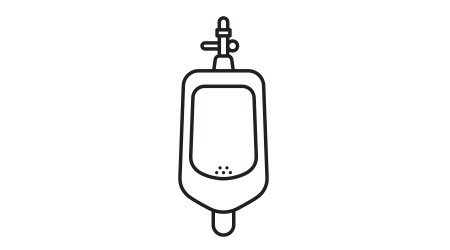 A designer has created a restroom with urinals that can be more easily used by the visually impaired.

According to a report from Yanko Design, the restroom leverages a visually-impaired person's stronger senses so that they can better navigate the public restroom. The design specifically focuses on the impaired's ability to hear.

The tiles on the floor are specially made so that the space in front of a urinal makes a sound when a person steps in that direction. As the person gets closer to the urinal the tiles will buzz again - eventually letting out a specific sound when the person is correctly standing in front of the urinal. Urinals that are already in use will make a particular sound so that the visually impaired person knows to move to another.

Should the sound fail, the visually impaired can use their sense of touch by way of guide rails in the stalls.

Once a person is done using the stall, they only need to step back for the urinal to flush itself.

Check out Yanko Design's story, here, to see pictures of what this special layout looks like.

Restroom inclusiveness is a problem for people with other conditions, disorders and disabilities. For example, parents or caregivers of teens or adults with disabilities often struggle to find an adult changing station in public restrooms.