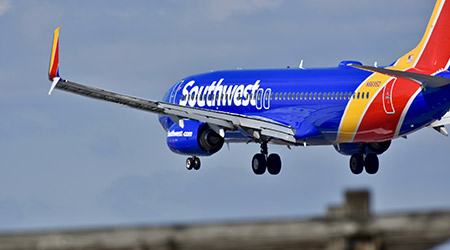 The key difference, as stated in a memo to Southwest flight attendants, is the discontinuation of seatbelts and arm rests being wiped down with disinfectant between each flight. The airline instead will direct its focus on high-touch areas — including the entirety of each tray table and lavatories — which will continue to receive disinfection prior to each new flight.

“These are the most important areas to clean between each flight, as they are prone to contamination from customer use and food/beverage consumption,” the memo states.

The remaining areas not receiving disinfection throughout the day will instead be areas of focus for “enhanced” cleaning each night, the memo notes.

Additional efforts to maintain a safe environment include monthly electrostatic cleaning, the blocking off of middle seats on all airplanes through the end of October, and the offering of personal sanitizing wipes to any inquiring traveler, says Southwest spokesperson Ro Hawthorne. He adds that airline officials will continue to monitor customer and employee feedback as they safety adapt to the new normal in air travel.

The news of Southwest comes just days after JetBlue Airways announced the implementation of expanded protocols, specifically the use of ultraviolet light.