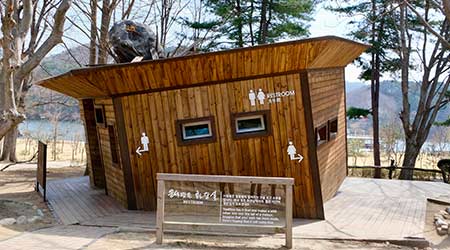 Feeling they're afforded as much leisure time as a king or queen, some employees elect not to rush their perch on the porcelain throne during work time restroom breaks. Those that write their checks, however, might not agree with this sloth-like pace. Luckily for them, one British startup has create a toilet designed to tireout people when they sit on it for too long.

StandardToilet’s special commode has a seat perched up 13 degrees higher than that of a traditional toilet, reports WLNY-TV. The designers say the special slope creates a sensation in the legs akin to what is felt when one does squat thrusts. As a result, most users will begin to feel an uncomfortable strain after about five minutes.

“It is estimated that in the United Kingdom alone, extended employee breaks costs industry and commerce an estimated £4 billion per annum,” says StandardToilet on its website. “Moreover,  medical studies have suggested that using the traditional [toilet] can cause swollen haemorrhoids and weakening of pelvic muscles. Our unique Patent Application, applicable [in the United Kingdom] and worldwide, offers the ability to increase business efficiency and profits through reductions in social media usage.”

The company also believes the toilet will reduce lines at shopping centers, bars, restaurants, sporting events, and other public venues.