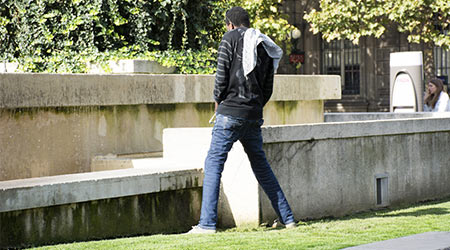 In a seemingly counterintuitive move, Paris is addressing its public urination problem by installing sidewalk urinals. According to NPR reports, the devices — called "Uritrottoir — are eco-friendly and completely exposed. They’re being touted as "the urban ecological solution for civilizing 'wild peeing.'"

The "Uritrottoir" — a combination of the words for urinal and pavement —  are bright red and are located in heavily trafficked areas — such as directly next to the Seine near the Notre Dame Cathedral. They are also marked with large white and red signs with a red arrow and a cartoon of a man urinating.

The receptacles are filled with straw and other composting materials to control odor. After time, that material eventually becomes compost. To help "beautify [the] public spaces," a small flower garden grows on top of each "Uritrottoir."

The new additions have appalled some Parisians. Paola Pellizzari, who owns a Venetian art store, told Reuters that there is no need to put something so “immodest and ugly” in such an historic spot.

Others think the urinals as sexist. The urinals suggest men cannot control themselves (or their bladders) and so “all of society has to adapt," according to Gwendoline Coipeault of the feminist group Femmes Solidaires.

Despite public opinion, French authorities say they are trying to supplement existing toilets in heavily congested areas where there have been issues in the past.

Three of the urinals were installed in March and a fourth added in July. According to reports, there are plans for a fifth soon.