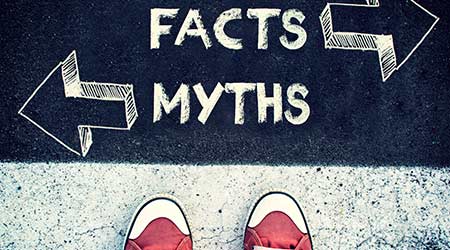 Distributors of no-water urinals manufactured by Waterless Co. indicate the following are the seven most frequently heard comments they hear about waterless urinals. We've analyzed each one, to help separate fact from fiction.

The urine just stays in the urinal. Urine is virtually all water. Like water, gravity forces it to flow down to the base of the urinal where it is released into the plumbing below, making this myth fiction.

Waterless urinals spread germs. When a water-using urinal is flushed, the force of the flush causes urine, germs, and bacteria to become airborne and splash onto walls, partitions, the floor, hands, and clothes. That flush of water does not occur with no-water urinals, eliminating this problem.

No-water urinals are illegal. When first introduced in the U.S. in the early 1990s, this was the case in some areas of the country. However, by 2001, the Uniform Plumbing Code International and the International Plumbing Code accepted no-water urinals, indicating they are a viable alternative to traditional water-using urinals and needed to encourage water conservation efforts around the globe

Waterless urinals are not waterless. This is partially true. Some manufacturers require that a certain amount of water be poured into the urinal regularly. However, for other brands, this is not necessary.

Waterless urinals are not right for busy locations. It's just the opposite.  Airports, stadiums, shopping complexes, hospitals, schools, and military posts are some of the biggest purchasers of no-water urinals.

Waterless urinals are yucky to clean. For the most part, they are cleaned in precisely the same manner as traditional urinals. However, it is recommended not to use harsh cleaning agents when cleaning a waterless urinal.