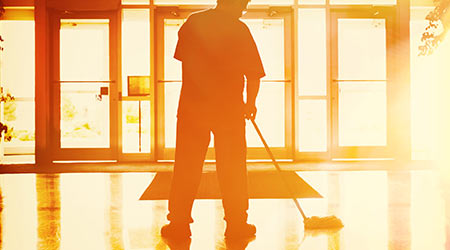 Raquel Guzman has worked in the Senate for the last 10 years cleaning in the basement salad bar. She and her husband, a janitor at Whole Foods, raised four children in suburban Washington, D.C. Last week, the 37-year-old, who has been working legally under what’s known as temporary protected status (TPS), learned she may be deported, according to the HuffPost.

The TPS program allowed nearly 200,000 people from El Salvador to remain in the U.S. after their country was hit by earthquakes in 2001. The Trump administration announced Jan. 8 that it will end the TPS program for Salvadorans next year, meaning people like Guzman will lose their work permits and face deportation.

The U.S. government expects Guzman and her husband to return to a country they haven’t seen in nearly two decades. And if they go, they will have to decide whether to bring their children or leave them behind, the article said.

There are no official statistics on how many Salvadoran workers with TPS status are employed on federal properties in and around Washington, but the number is “significant,” according to Paco Fabian, a spokesman for Good Jobs Nation, a labor group that’s been organizing low-wage workers employed under federal contracts.

Guzman is a member of Good Jobs Nation, she said she knows other TPS workers inside the Senate buildings as well as at the Supreme Court across the street. All of them work for contractors rather than directly for the government.