Scientists Are Worried About Next Flu Season 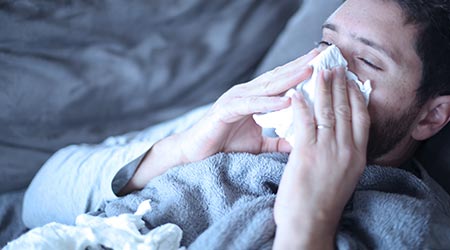 The 2020-2021 flu season was idyllic for healthcare providers, businesses, schools and the American public, as efforts to slow the progression of COVID-19 helped influenza cases to shrivel to figures significantly lower than usual. However, the good fortune could come at a cost, as a lack of immunity built this past season might mean more cases in 2022, reports NBC News.

During a typical flu season, babies and young children are the ones who prove most susceptible to an infection because those individuals haven't been exposed before. But when few people of any age are infected in one season, more people are fair game for the flu.

Scott Hensley, a microbiologist at the University of Pennsylvania Perelman School of Medicine, told NBC News that there could be rise in cases throughout the population, as well as pediatric deaths due to the flu.

It's also possible -- but certainly not proven -- that there were fewer flu strains going around during this past flu season, another factor that could have contributed to lower rates of infection. If there are few strains during the next flu season, it will make the vaccine administered at that time all the more impactful.

Dr. Jessee Goodman, a professor of medicine and infectious diseases at Georgetown University, was able to bring some positivity to the discussion. He said that a continuation of efforts to social distance or wear masks in public could help keep flu infections low this coming fall and winter.