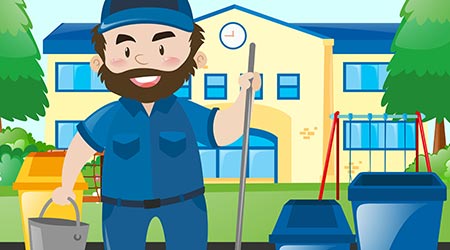 Some school janitors care for the wellbeing of their kids so much that they’ll do just about anything to to help them. One janitor in Florida has become a perfect example of this commitment.

“Mr. Jerry,” as students call him, slept atop the roof of Ocean Palms Elementary school as part of a playful pact he made with the kids, reports News 4 JAX.

The school is currently raising funds to build a new playground, and at the beginning of the efforts Mr. Jerry promised to complete a number of silly tasks should the students reach certain benchmarks. He slept on the roof in a tent, sporting an umbrella hat after the kids raised $50,000.

At the time of the report the students had raised $60,000 for the playground. Other odd acts Mr. Jerry completed after benchmarks were reached included dying his hair green and agreeing to being doused with ice water during a school pep rally.

Another school janitor recently helped brighten the day of a student through a heartwarming act that was shared across the internet.

The janitor, known as “Ms. Esther,” was shown in a viral video comforting a saddened student with autism who had been laying on the floor in despair.