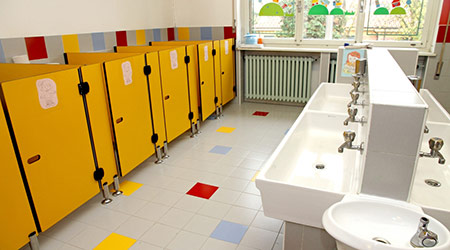 Nearly a dozen students at Conneaut Elementary in Bowling Green, Ohio, reported a rash earlier this week that turned out to be chemical burns from the cleaner used on toilet seats, according to an article on the Sentinel-Tribune website.

Several students came to the office, complaining of itching around the back of their legs and backsides. The nurse concluded the redness came from scratching, and put hand lotion on the area thinking it was the result of dry skin. Students were told to notify their parents; it was suggested to one parent in the office at the time that the inflammation may be from laundry detergent, the article said.

Sentinel-Tribune obtained access to an email that went out to parents saying: "We were notified this morning by two parents who reported their children had experienced what appeared to be chemical burns from exposure to a toilet seat. We immediately began an investigation by contacting the distributor of the cleaning products we use who assured us the product was widely used and safe for the intended purpose of disinfecting hard surfaces including toilet seats. They did suggest this could be a case of cross-contamination of chemicals or cleaning supplies. Before students entered the affected restrooms this morning the facilities were cleaned again with new materials."

The buildings and grounds, department had recently changed their cleaning products. According to the school, purchasers were assured that the new products were "neutral for cleaning toilets and fixtures." Further use of the new product has been put on hold.

All affected areas have been re-cleaned with the old product while the district reviews the chemicals used from the distributor.