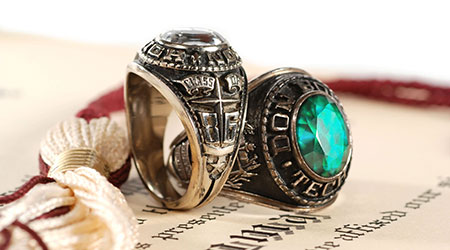 When he was cleaning up garbage in the woods near the Carrie E. Tompkins Elementary School in Croton, New York, custodian Brian Rizzo found treasure among the trash. According to The New York Post, Rizzo, 39, was sifting through the refuse, mostly glass and other debris, when he spotted something shiny.

He brought the mud-caked ring back to his office and soaked it in some soap and water. The ring read: “Croton-Harmon School,” followed by the year 1979. Rizzo also found the letters DPM.

Rizzo went to the Croton library and looked through old yearbooks until he found Daniel Patric Macrini. He reached out to Macrini via Facebook, but never heard back. He eventually found Macrini’s workplace — he's a chef in Tennessee — and left a message. Less than 30 minutes later, he heard back.

Macini, a 57-year-old father of five and grandfather of 11 who works as a dietician director in a senior living community in Franklin, hadn't thought of the ring in years, but was thrilled with the news.

“It’s an awesome feeling — it truly brought me back,” Macini told Post reporters.

Rizzo and his wife picked out a flashy box to put the ring in before sending it to Macini.

To those who were surprised he took the time, Rizzo said, "But it’s not mine — it’s a piece of someone that’s been missing.”