In another round in the Men Vs. Women debate, a new survey from the Bradley Corporation shows that men are less likely to wash their hands than women.

According to the 2013 Healthy Handwashing Survey, just 60 percent of men say they always wash their hands after using a public restroom, as compared to more than 74 percent of women.

While men cited the lack of soap in restrooms, as well as dirty sinks as the main reasons for not washing up, women reported they used hand sanitizer instead.

Men were also more than 2.5 times more likely than women to say they “didn’t feel the need,” to wash hands, the survey says.

“Men need to get the memo that hand washing is important no matter what,” says Jon Dommisse, director of global marketing and strategic development at Bradley. “You just can’t argue with the research that says it is the number one way to prevent illness and stay healthy.”

There is one area where men and women appear to be on the same page: on the issue and importance of restroom cleanliness.

A full two-thirds of survey respondents said they believed “bad” bathrooms — those with bad smells, clogged or un-flushed toilets and dirty, unkempt or old fixtures —equated to bad management.

At least 93 percent of Americans, believed the condition of a workplace restroom to be an indicator of how a company values its workforce, the survey says.

Perhaps the most revealing facts from the survey included the lengths at which people go to avoid cross-contamination with objects in a public restroom. The survey found that 64 percent of people prefer to flush the toilet with their foot; 60 percent use a paper towel when touching a restroom door; 37 percent use a paper towel when touching faucet handles; and 48 percent open and close doors with their hip.

Of course, that dance could be avoided, says Michael McCann, a Ph.D. medical microbiologist at Saint Josephs University in Philadelphia.

“Good hand hygiene is one of the most important, and easiest things we can do to reduce our own risk of getting sick and of spreading germs to others,” he says. “Thorough hand washing, using soap and warm water for a good 20 seconds is highly effective in removing bacteria, viruses and other disease-causing micro-organisms from the surface of our skin.” 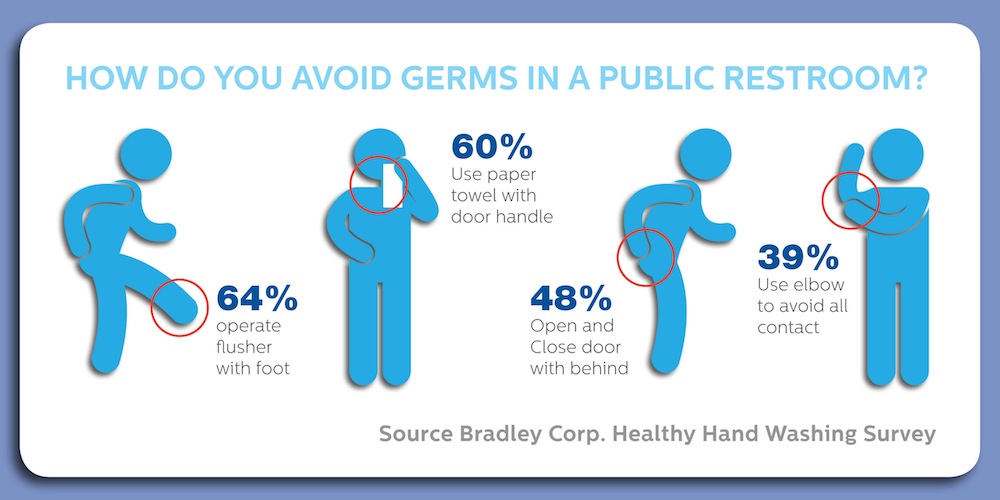