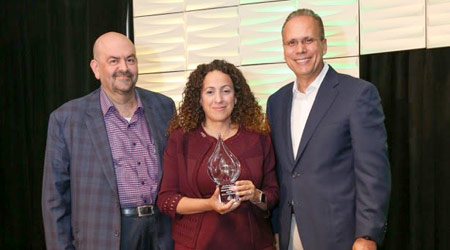 The award, named after Marcus Theatres Corp. Founder Ben Marcus, represents an individual who is a successful leader within their industry, who is also committed to giving back to their community.

“We feel that we have been on the recipient end of kindness for so many years,” says Marianne. “We have the privilege to impact others.”

Leaving war-torn Lebanon at age 17, George came to California seeking the American Dream and a chance to better himself. He started a janitorial cleaning company to pay for his college tuition. In 1985, however, he saw more opportunity for greater success in distribution.

With a focus on people — customers, employees and vendors — and the willingness to customize programs to answer any need, Royal has found success. The once West Coast distributor has grown to an international jan/san and movie concession supplier.

The success of Royal has enabled the Abiaads to benefit others. Both George and Marianne are always willing to invest time and resources into the lives of their employees, customers and friends.

“They give back because it’s the right thing to do,” says Rolando Rodriguez, president and CEO of Marcus Theatres Corp. “They are two immigrants who came to this country with a dream — and that dream turned into a reality.”

George considers himself a student of the Ben Marcus method, another immigrant with a love of America and a dream with vision and self-sacrifice.

This is just the latest announcement from a company that has made great strides in the jan/san and foodservice industry. George and Marianne Abiaad were profiled in Sanitary Maintenance for their “attitude of gratitude.”