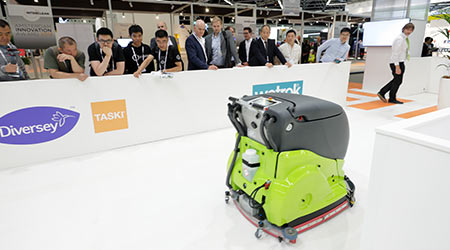 Based on the number of exhibitors showcasing robots at Interclean, it's no surprise that the cleaning robot market is predicted to double in the next five years from $2.09 billion to $4.34 billion, according to a report by Markets and Markets.

Highlighting this technology at Interclean was the return of the Robot Arena. But what once was a simple and large open area to demonstrate machines is now a complex space with interior maze-like walls, school desk obstacles and individual stalls to return to. The new look of the arena is proof of the rapid advancements and sophistication of this product category.

Advancements seen at Interclean make this technology more practical for end users. For example, although many robots still require manual interaction to program the machine, Karcher's robot, which won both the Machines Innovation Award category and the Overall Innovation Award, is truly autonomous. Instead of relying on an operator to map the route, the robot defines its own route while cleaning. In addition, by using a docking station, the machine is able to recharge itself, empty its own solution tank and refill the water tank.

Traditionally, robots are large machines. They have sensors to work around obstacles, but their size limits them to cleaning larger spaces such as hallways, entryways, open concourses, etc. However, companies exhibiting at Interclean are shrinking the robotic equipment to autonomously clean tighter spaces.