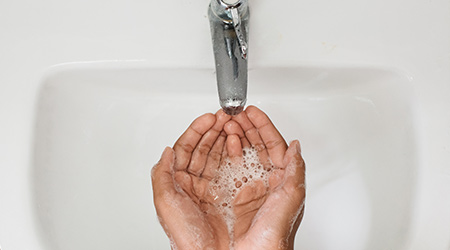 Plenty of people have expressed concern over the increased presence of robots in society — and in some cases rightfully so. But there’s also plenty of tales of how robots are helping to improve society. Such is the case in India, where a robot is helping children to practice good hand hygiene.

Wayanad’s Government Primary School Chithragiri, a school of about 100 students ages five to 10, has installed a hand-shaped robot named Pepe over the area where kids wash with soap and water, reports Quartz. The results have been remarkable. Since Pepe was installed, the student handwashing rates have improved by 40 percent.

Pepe features a small video screen that’s placed where his mouth would be — provided hands had mouths. Researchers have Pepe setup so that he can speak and gain the attention of students, encouraging them to wash their hands. His eyes also appear to be watching the students, giving the illusion that he will see if one of them opts to wash his or her hand incorrectly.

In addition to bolstering handwashing compliance, Pepe has also helped to improve the hand washing technique of students. Since Pepe was installed, the kids have washed their hands twice as long as they were before.