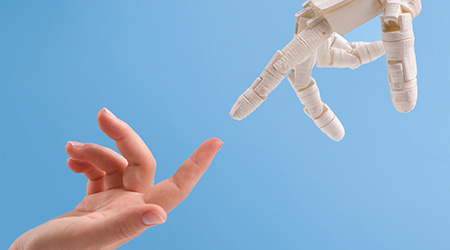 Few restroom situations are more mortifying than one in which the person going notices the toilet paper supply is low or out after sitting down. In an effort to pulverize these anxiety-inducing situations, Charmin has developed a robot that conducts seat-side toilet paper delivery.

“Rollbot” brings toilet paper along when summoned by a smartphone, reports CNET. Sticking to Charmin’s television marketing, the rather diminutive two-wheeled machine has an octagon front with a cartoon bear's face planted on, along with two similarly shaped ears.

It's unknown how the robot, which was on display at CES 2020 in Las Vegas, is able to grab a roll of toilet paper or open a (presumably) locked restroom door.

In addition to Rollbot, Charmin displayed a sensor that will warn a person if the restroom they are about to enter will have a horrid smell. The sensor accomplishes this feat by monitoring the amount of carbon dioxide or hydrogen sulfide in the room's air.

Lastly, Charmin unveiled a special portable restroom accompanied with an Oculus Rift S VR headset so occupants can watch what is going on at the event they are at (like a concert or game) while they relive themselves.

While many of the ideas weren't as out there as Charmins, several companies have come up with other forms of smart technology concepts fit for the restroom. For example, Kohler has developed a toilet that changes color, features Amazon Alexa and has a heated lid.