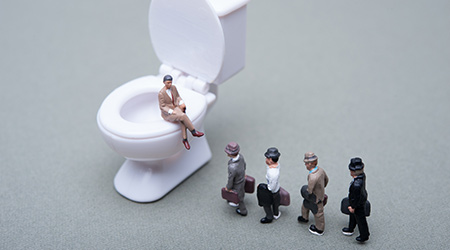 Even though most of the media was focused on the bright lights, retractable roof and 1,100-foot halo video screen at Sunday's Super Bowl, those visiting Mercedes-Benz Stadium likely paid more attention to the location of the closest restroom — especially after visiting one of the 1,260 beer taps. Fortunately, the sports fans didn't have to venture too far from their seats to get some relief. According to ESPN reports, the stadium features a 30 percent increase over the Georgia Dome in female toilets (22 percent for the men).

Architects also gave the same attention to the restrooms as they did the rest of the stadium. The swan-neck, stainless steel hands-free faucets reportedly match the building's architecture, and the drum-sized JBL ceiling speakers provided restroom users with better sound of the game's play-by-play than what is found in most of nightclubs.

Less obvious to those who sought relief during the big game is the treatment on restroom floors. Before the $1.6 billion stadium opened in 2017, facility executives made sure every one of the restroom floors was coated in a dual-system polymer called Methyl Methacrylate. This protects tile and grout from corrosive uric acid.

"Everyone is going to use the restroom," Scott Jenkins, Mercedes-Benz Stadium general manager, told ESPN reporters, "The functionality, the quantity, the aesthetics of your bathrooms is critical. It seems unremarkable to most people, but, trust me, you invite 70,000 people to your house and you get the bathrooms wrong — you've got a huge problem."

In years past, poor restroom experiences at the Super Bowl have plagued stadiums thrust into the spotlight. That was the case in 2018 when Minneapolis hosted. Fans reportedly produced 8,000 gallons of urine while using restrooms that were in "horrific condition with outrageous lines."

According to ESPN, even though U.S. Bank Stadium in Minneapolis is equipped with 979 toilets, more than half are female. This meant male fans got a taste of what it means to wait in long restroom lines — some as long as 30 minutes.

For more about trends in stadium restrooms, click here to read the full article.