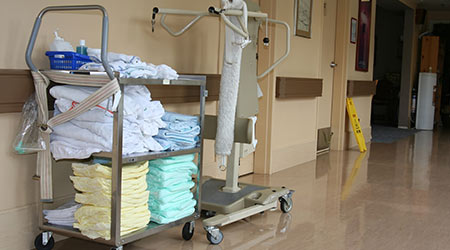 Approved by 28 signatories representing 12 U.S. universities and affiliated health facilities, the study measured microbiological content of pathogenic fungi on freshly laundered linens in 15 transplant and cancer hospitals. The research report indicated that further studies are needed to understand the clinical significance of the findings. But there is “sound rationale for including microbiologic culturing of HCLs in quality control and IP (infection prevention) protocols, despite the lack of conclusive data on the dangers posed by contaminated items,” the report said.

Hygienically Clean Healthcare is described as a voluntary program that certifies laundries as providing “hygienically clean” HCLs: free of pathogens in sufficient numbers to cause human illness. The certification’s standard calls for cultures of samples of clean linen to contain:

Such testing isn’t government-mandated and U.S. health professionals have yet to reach a consensus on “sufficient numbers” to define risk, the report noted, calling for wider agreement on practical and efficient microbiological testing methods and criteria for interpreting culture results.

Joseph Ricci, TRSA president and CEO, welcomed the opportunity to engage in such dialog.

“We look forward to learning more about the study and collaborating with its contributors and other stakeholders as Hygienically Clean perpetuates its continuous improvement to maximize patient safety,” he said.

Microbiological testing of HCL samples from the participating hospitals took place at the University of Pittsburgh Medical Center. Researchers’ choice of RODAC plate testing, the same methodology used in Hygienically Clean certification, validates TRSA’s use of this protocol, Ricci noted.

The study deemed a hospital’s linens hygienically clean if 90 percent or more its samples were completely free of the Mucorales fungus. Three of the 15 hospitals did not perform as such. Linens from one facility underwent longitudinal testing from June 2016 to January 2017, falling below the standard seven times. Following environmental remediation in that laundry, including cart-cleaning and lint removal, the standard was met in each of 11 tests taken from June 2017 to May 2018.

Nearly 200 laundries have attained Hygienically Clean Healthcare certification or are in the process of becoming certified. Certification is attained when a laundry passes inspection and three consecutive months of microbiological testing meet the above minimum microbiological performance specifications. Such testing then takes place quarterly.