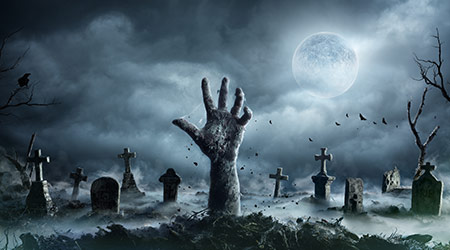 As both the flu season and Halloween take place, now is as good a time as ever to revisit the 1918-1919 influenza pandemic — a horrid period in American health that lead to situations so bizarre that they truly mirrored a horror film.

Elizabeth Outka, an associate pressor of English Literature at the University of Richmond, wrote a story this week that connects the 1918-1919 flu pandemic to the rise of zombie stories in America.

To get an idea of how the historic flu could inspire tales of the living dead, one should understand just how deadly the 1918-1919 pandemic was. More than 25 million Americans became ill due to the outbreak, 675,000 of which died. For scale, the 675,000 deaths is more than the amount of people who died in every war in the 20th and 21st Century, according to History Of Vaccines.

Philadelphia was hit particularly hard by the flu in 1918. In fact, more than 751 people in died in the city due to the flu on one day alone.

The flu scene in Providence, Rhode Island was so bad that victims were buried side-by-side in long trenches, according to Outka. Funeral directors worked in complete fear of contracting the illness from the bodies they dealt with.

Horror writer H.P. Lovecraft just so happened to be from Providence. He used the sights of people dying in mass due to the flu to inspire stories of infectious settings that created flesh-eating people. One of his stories involves a doctor who wants to bring fresh corpses back to life. This doctor gets a chance to do so when a pandemic brings him a large number of new bodies. When one of the doctor’s treating the outbreak dies, the story’s lead character brings him back to life as a zombie.