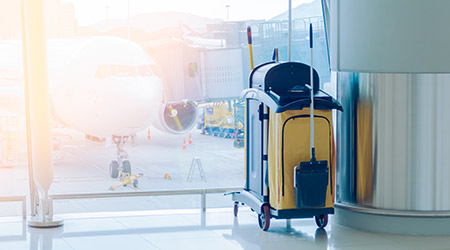 A recent dispute between an airplane cleaning crew at Minneapolis-St. Paul International Airport and two managers sparked a protest over prayer breaks.

Members of the seven-person cleaning crew, all Muslims and employees of U.S. Aviation Services Corp., a contractor for Delta Air Lines, said they were fired after taking a few minutes off for obligatory prayer at a time when they had no planes to clean, according to an article on the "Star Tribune" website.

U.S. Aviation Services said the workers took the break at a moment when they had been assigned a plane and their absence caused a flight delay.

About 30 people, including several clergy, joined in the protest and march, which ended at a Delta office building on the west side of the airport. Executives there directed the workers to discuss the matter with U.S. Aviation.

The protest evolved from an event previously scheduled to call for a higher minimum wage at the airport.

The incident brought increased attention to the issue of wages at the airport. Service Employees International Union  (SEIU) and other activist groups say the short, fluid contracts between airlines, restaurants and hotels and subcontracting firms make it difficult to sustain momentum for better wages and benefits on behalf of workers.

U.S. Aviation Services, a unit of Chicago-based United Services Cos., won a bid to provide ground services, including cabin cleaning, baggage handling, in-terminal assistance and other work for Delta at MSP in the summer of 2017.

In its statement, U.S. Aviation said it knew when it got the contract that most of its workers would be Muslim and developed practices for workers to take prayer breaks.

Under Title VII of the Civil Rights Act, employers must make a reasonable accommodation for employees to practice their religious beliefs in the workplace unless it would cause the employer difficulties to run its business.

Click here to learn more about religious rights in the workplace.