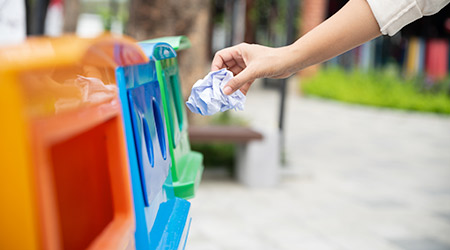 India recently announced it won't be accepting post-consumer plastic imports, and China has already stopped accepting most recycling imports. The reason, according to Popular Science reports, is partly because of the often highly-contaminated materials recycling countries have been sending.

Although there might be fewer options for handling recyclables oversees, some U.S. companies are happy to tackle this problem here at home. Waste Management, for example, operates 100 recycling sorting facilities in North America and sells its materials to domestic recycling plants, so its operations have remained mostly unchanged.

For organizations that strive for better recycling, here are some tips:

• Scrap metals — such as old pipes — are contaminants. They are recyclable but need to be taken to a facility that can handle them.

• Crushed cans and cartons can contaminate recycling because they’re harder to sort out when flattened.

• Paper products and containers made of glass and aluminum are usually fine. Plastic can be more confusing. Stick to bottles, tubs, jars and jugs. Food doesn't contaminate plastic and glass, but it's good to rinse them to discourage pests throughout the collection process.

• In paper products, food can actually ruin the material, making it unrecyclable. A really greasy, cheesy pizza box should be composted instead of recycled.

• For plastic containers, keep the lid back on. The end markets now want the lids. But they need be on the bottle or they’ll get thrown away.