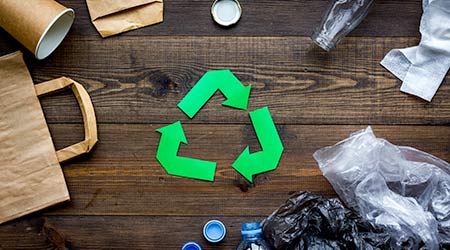 From giving every student a recycling bin to disposing of everything from bottles to batteries, some colleges are taking the lead in the movement to reduce, reuse and recycle on campus. Initiatives like these that emphasize environmental stewardship, as well as human health and wellness, are driving innovation in facilities across the country.

The following five universities are among those that have had success in establishing effective programs. They are among a handful that were highlighted by The Best Colleges.

• American University in Washington, D.C., is working to be 100 percent waste-free and is ramping up its efforts in part by composting all paper towels from restrooms on campus and all kitchen waste from three dining areas and recycling kitchen grease is for electricity.

• College of the Atlantic in Bar Harbor, Maine, shines in the area of food recycling. Every last scrap of food waste is composted, along with the napkins and disposable flatware.

• University of California Davis, in Davis, California, also has a zero waste goal by the end of this decade. In food recycling, 98 percent of all food waste was being composted as of 2009. The school also targets move-in and move-out days, recycling 10,000 pounds of cardboard during move-in in Fall 2009. The school also features a zero-waste athletic stadium.

• Kalamazoo College in Kalamazoo, Michigan, has a recycling department that oversees the export of about a ton of food waste a week to a local pig farm, as well as the recycling of calculators, batteries, electric motors and all other e-waste.

For more about the programs in place at these schools, as well as initiatives at six other universities, click here.