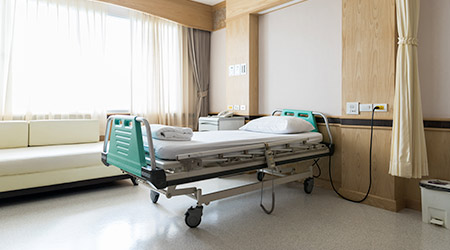 umf Corporation, developers of textiles for infection prevention and commercial cleaning, has developed Micrillon, the first rechargeable broad-spectrum antimicrobial polymer additive that will have a significant impact on the spread of drug-resistant infections and preventable hospital associated infections (pHAIs), now considered the fourth-leading cause of death in the United States. Micrillon, which has earned multiple patents worldwide, can be incorporated into a wide range of polymer (plastic) products to help mitigate risk of such infections. The first Micrillon product – a hospital privacy curtain-pull, ideal for use in hospital, long term care and nursing homes – will be introduced at the Association for Professionals in Infection Control and Epidemiology (APIC) conference in Minneapolis June 13-15.

The World Health Organization (WHO) has indicated that the rise of antimicrobial resistance is a global health crisis. An estimated 700,000 people die every year from drug-resistant infections, according to a recent British commission review. And, the World Bank warns that the spread of drug-resistant infections could mean a hit to the global economy even greater than that of the 2008 financial crisis.

“Infection prevention has become a priority for industries across the board,” says umf Corporation CEO George Clarke. “From hospitals and hotels to cruise lines, schools and food service, the struggle to prevent infections is ubiquitous. The societal cost of HAIs in acute care hospitals in the U.S. has been estimated to be $147 billion annually. We developed Micrillon to help address this challenge, employing rigorous laboratory testing to confirm product efficacy. Our primary goal is to reduce the risk of pHAIs by making it possible, for example in a patient room, for all frequently touched (environmental) surfaces to include Micrillon.”

Preventing pHAIs Head-On
Micrillon is a disruptive, innovative chemistry that has the potential to help prevent pHAI’s head-on. The broad-spectrum antimicrobial is the result of more than a decade of research and development of best-in-class products and training – including color-coded systems and a ONEperROOM methodology for reducing the risk of cross-contamination in leading hospitals. Micrillon’s unique properties include antiviral efficacy, the ability to recharge for the life of the product, and no leeching into the environment. When incorporated into a product made from plastic, the entire surface, whether a fiber or solid part, can be charged with chlorine molecules. When bacteria, mold and viruses come into contact with the Micrillon surface, they are eliminated. A Micrillon fiber wiper then can be used with a disinfectant or chlorine-containing sanitizer to remove soil and organic matter while simultaneously recharging the surface.

The Micrillon cycle concept is simple, and the chemistry can be incorporated into all people touch points in hospital rooms, intensive care, the OR and ER. So, everything that people touch – such as light switches, bed rails, door handles, curtain pulls, walls and grout – would be a rechargeable Micrillon antibacterial/antiviral surface. When cleaned, all these touch points would be recharged.

The first product in the Micrillon line is a hospital privacy curtain-pull, ideal for use in hospital, long term care and nursing homes. Acrylic latex grout and paint with applications across markets including healthcare facilities, schools and hotels will be available soon. In the coming year, umf Corp will introduce additional Micrillon products, including surgical wipes, cubicle curtains, bath towels and HVAC/filtration products.