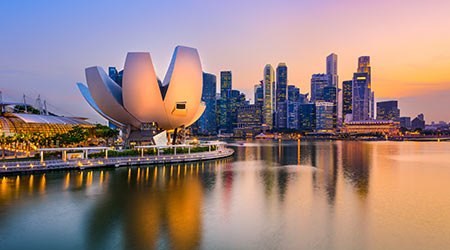 Technologically speaking, Singapore is one of the most advanced places on Earth. There’s no shortage of cool new inventions coming out of Singapore, but one of those technological advancements is so unique that one might have trouble believing it to be real.

Singapore is releasing hundreds of “friendly” robots to clean shopping malls, hotels and government offices throughout the Asian city-state, reports Asia One.

Some of the talents these robots possess are no surprise — they mop, scrub, vacuum and sweep. But they’re also built to successfully interact with locals. Each robot is fluent in Singapore’s four official languages: Mandarin, English, Malay and Tamil. Someone wishing to speak to one of the robots can do so by pressing a button on the robot or by using an app.

Apparently fans of hip-hop, the company that engineered the robots, LionsBot, gave them the ability to rap. They can also tell jokes.

Each of the robots are rented out for $1,350 a month. Some have already been rented to clean an airport, art gallery, resort and office building.

Lionsbot says the robots were not built to replace human cleaners, but rather to help them with their job duties.

While rapping, multilingual cleaning robots don’t appear to be a thing in the United States (yet), robots are already changing the way America cleans. When his Alaska-based janitorial company struggled to hire enough workers, Curtis Lucas built a robotic commercial vacuum and floor scrubber himself.