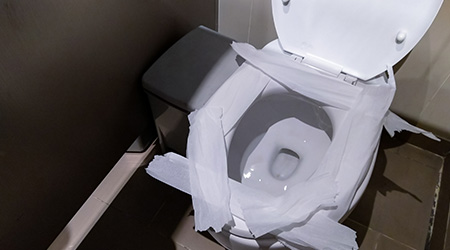 As the United States slowly begins to reopen for the first time since March, there's been a lot of talk about what places will need to be avoided longer than others. One spot that's routinely come into question is the public restroom. And for good reason: The great majority of Americans have plenty of bad experiences in germ-filled, smelly and unsightly public restrooms. But it's these well-documented traits that have some experts believing that the public restroom is no more dangerous than before.

As the Las Vegas Review-Journal reports, experts have been warning against the dangerous materials lurking in restrooms for decades. The publication cites C.U. Jessen, who in 1955 discovered that microbes shot into the air after a toilet flush (now commonly referred to as "toilet plume" could stay airborne for up to eight minutes. A microbiologist at New York University concluded in 2016 that these plumes can be shot as high as 15 feet post-flush.

Despite the renewed focus on plume and other unsettling restroom facts, the public restroom is no more worrisome than it was before, Epidemiologist Brian Labus tells the Review-Journal.

Regardless of whether or not the restroom is more or less dangerous than before, change has to be made. One way to curb plume concerns is to put a cover over the toilet before flushing. However, some say this creates another issue in public restrooms because the person who comes in to use that same toilet after the flush is going to have to lift the cover coated in plume.

There are toilets out there that are self-cleaning and capable of raising and lowering their own lid, but those cost at least a few thousand dollars - who's going to invest that much into their restroom?

Until the perfect toilet can be created and sold at a reasonable price, the layout of the American public restroom should be changed, Tim Pyle of the American Restroom Association tells the Review-Journal. Pyle suggests some urinals be shutdown for social distancing purposes and that those above-mentioned seat covers be installed on all toilets. Eventually, he hopes the common public restroom will feature just one toilet.

To read the rest of the Review-Journal's report, click here.