Protests Held In Honor Of Justice For Janitors Day 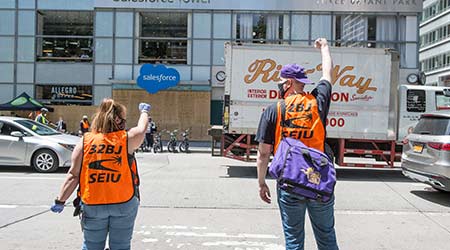 Thousands of essential janitors have held or are planning to hold rallies, marches, vigils and strikes this week in honor of Justice For Janitors Day, which was celebrated on Tuesday.

The events are being held so that janitors and custodians can demand fair wages, health care, improved safety protections, and a more just immigration system, according to a press releases from Service Employee International Union (SEIU).

“For 31 years, essential janitors have fearlessly stepped up to demand that they be respected, protected, and paid,” said Mary Kay Henry, president of SEIU. “Our fight will continue until corporations and congress honor the essential work janitors have provided before, during and after this deadly pandemic.”

This week of action marks the 31st anniversary of Justice for Janitors Day - a day that commemorates the unbreakable spirit of immigrant Latino janitors who were peacefully protesting for the right to form a union in Los Angeles in 1990. As those janitors were marching through the city's wealthy Century City neighborhood 31 years ago, Los Angeles police brutally attacked them, beating essential janitors with clubs, sending more than 60 janitors to the hospital, according to SEIU. The confrontation, which was caught on news cameras and covered by media outlets throughout the world, led to an outpouring of public support for janitors, and they won their union. Their victory inspired thousands of underpaid workers of color -- janitors, security officers, and airport workers -- to form unions and win better lives for themselves, their families, and the communities they live in.

In the last five years alone, SEIU janitors have fought for strong union contracts that successfully brought more than $1 billion back into the families and neighborhoods where janitorial workers reside. Today, two-thirds of union janitors have won an hourly wage of $15 or more per hour, 70 percent have won full-time hours, and 85 percent of full-time janitors now have access to employer-paid family healthcare.

“I went without eating for 17 days in order to win a union because I knew that was the only way I was going to be able to provide a good life for my son. He cried every day as I left for the picket line,” said Clara Vargas, 32BJ janitor at the University of Miami, who is celebrating the 15th year anniversary of the university janitors’ union fight. “Since then, we’ve helped thousands of airport workers and cleaners organize because we know there is strength in numbers.”