President Of Performance Plus Named An Influential Woman 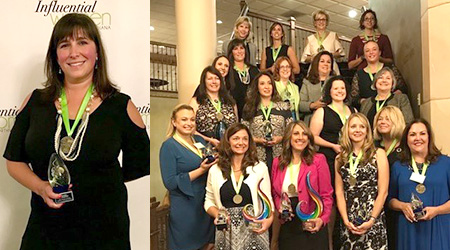 Paula Broutman, president with Performance  Plus, Gary, Indiana, was celebrated for the impact her efforts have made on the region at the Influential Women of Northwest Indiana awards banquet.

During a ceremony in September, Broutman received the title of Up & Coming Woman in the category of Service & Tourism.

After working in corporate catering in Chicago for 20 years, Broutman decided to join her family business in 2011. She started her career at Performance Plus as a salesperson and marketing director, and became the 4th generation of family members to join the company. Shortly after arriving, she became majority owner and president, which enabled Performance Plus to gain a WBE (Women’s Business Enterprise) Certification in the State of Indiana.

In earning the title of Up & Coming Woman, Broutman joins the ranks of numerous other prominent Influential Women alumni that have collectively helped shape and define what life is like here in Northwest Indiana. Though they come from many different types of industries and backgrounds, every single one of the Influential Women have left an indelible mark on our companies and communities that will last for generations.

“These women have changed corporate cultures, they’ve treated the sick, they’ve educated the young, they’ve made their communities better places to live, and they’ve shown all of us, through their example, that women have what it takes to achieve the impossible and bring aspirations to fruition,” says Andrea Pearman, founder and lead coordinator of Influential Women.

In 2017, Performance Plus celebrated its 100th year in business in Gary. Broutman is extremely proud to usher Performance Plus into its 2nd century of providing janitorial service to businesses in Northwest Indiana.