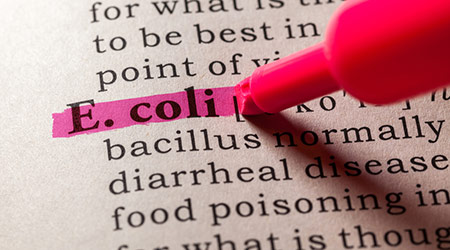 Researchers in England have concluded that failing to wash one’s hands after using the toilet puts them at greater risk of contracting antibiotic-resistant E.coli than eating uncooked meat.

Infections from the uber-resistant ESBL-E. coli bacteria has become more common in hospitals and in the public, which motivated researchers at the University of East Anglia in Norwich, England to study how the superbug has been spread, reports Medical News Today.

In the human feces, blood and sewage samples, researchers discovered the dominant strain of ST131 to be present. However, ST131 was wasn’t often found in the food samples.

The fact that the human and foods samples didn’t share much of the same E. coli stains in common suggests that most cases of antibiotic resistant E. coli is spread though bad hygiene, the researchers concluded.

One of the key researchers says the most likely cause of the spread of antibiotic-resistant E.coli is fecal particles of one person coming in contact with the mouth of another.

The fact that antibiotic-resistant E.coli is most often spread by bad human hygiene further highlights the importance of cleaning in the public setting. Of course, the cleaning has to be done right. When it’s not done correctly, there are issues.