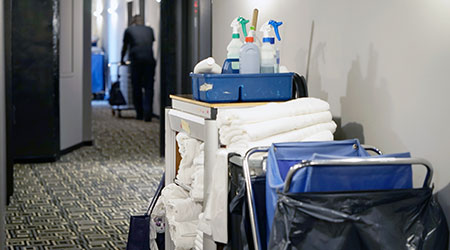 Ontario Police have freed 43 modern-day slaves brought to Canada from Mexico and forced to work as cleaners at hotels. According to CBC reports, the cleaners — mostly men between ages 20 to 46 — were coached on what to say when they entered Canada and lived in "squalid" conditions. Once they arrived in the country, the 43 were transported to hotel and vacation properties in Central and Eastern Ontario to work.

According to reports, the victims had paid the traffickers to get them out of Mexico, but  were then charged additional fees for transportation and lodgings. These "fees" were deducted from paychecks, in some cases, leaving the cleaners with less than $50 a month.

The Mexicans had been brought to Canada under the pretense of being there for educational purposes or the promise of work visas and eventually permanent residency status, the article said.

Canadian officials said the workers are now there legally. Since they were rescued, they have been offered legal work and accommodations at an Ontario resort.

The police declined to name the hotels and vacation properties where the men worked or the cleaning company in Barrie that allegedly was responsible for the trafficking.

Criminal charges may be announced at a later date, the article said, and police said they are looking for other suspects. Currently, the alleged traffickers have not been arrested or charged.