Partnership Means Higher Performing Buildings Will Be Easier To Achieve 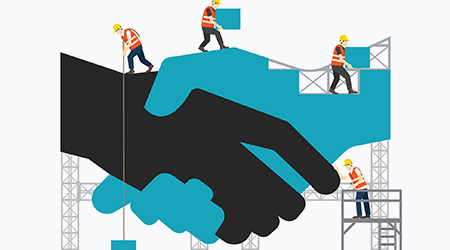 A unified green building code that could become the foundation for LEED certification was created in 2011, thanks to a partnership among ASHRAE, the International Code Council (ICC), the American Institute of Architects (AIA), the Illuminating Engineering Society (IES), and the U.S. Green Building Council (USGBC).

That effort got a boost in August 2014, when ICC and ASHRAE agreed to align the technical requirements of ASHRAE's Standard 189.1 for High Performance Green Buildings (189.1) with ICC's International Green Construction Code (IgCC) into one single model code.

With that agreement, and with the subsequent definition of each organization's roles, the ASHRAE Standard 189.1 committee continued revising the standard so it could provide technical content for the IgCC, with the ICC responsible for the administrative sections and publication.

"The 2018-IgCC will provide the design and construction industry with the single, most effective way to deliver sustainable, resilient, high-performance buildings," said International Code Council Board President M. Dwayne Garriss, Georgia State Fire Marshal. "The 'IgCC-powered-by-189.1' joint initiative framed the essential sustainable construction building blocks on which future resilient initiatives can develop and expand. We appreciate the dedication and efforts of our partners, ICC Members and all who contributed to the development of the IgCC powered by 189.1."

By collaborating on developing the 2018-IgCC, these organizations envision a new era of building design and construction that includes environmental health and safety as code minimums. The goal of the 2018-IgCC is to provide fundamental criteria for energy efficiency, resource conservation, water safety, land use, site development, indoor environmental quality and building performance that can be adopted broadly.

With that foundation, local jurisdictions can build upon regulatory requirements by leveraging complementary leadership strategies that support and encourage the evolution of the building community. Initial steps in achieving these outcomes include publishing the 2018-IgCC, streamlining compliance for aligned strategies in LEED certification, and promoting the use and implementation of these tools.

The Integration of ASHRAE Standard 189.1 & IgCC
As a standing project committee, the ASHRAE 189.1 committee has updated the technical aspects of Standard 189.1-2014 using ASHRAE's continuous maintenance procedures. To publish the updated version of the standard in 2017, the committee has deadlines for the many revisions being proposed so they can be included in the 2018-IgCC publication.

ASHRAE's ANSI-approved process for these proposed changes to the standard will be wrapping up this summer, with final addenda undergoing public review now. Later this year, the final set of changes for the 2017 version of Standard 189.1 will be delivered to ICC. At that time, ICC will develop the administrative procedures for the technical content and codify the document into the 2018-IgCC.

In anticipation of this timeline, ICC did not retain the IgCC committee in 2015. Members of the ICC Sustainability, Energy & High Performance Building Code Action Committee (SEHPCAC) have, however, contributed to the 189.1 process, providing recommendations and proposals within the 189.1 process that seek to carry over provisions from the 2015 IgCC into 189.1.

These proposals, and those from other stakeholders, have resulted in several dozen changes to the 2017 version of Standard 189.1, and in these efforts, the integration of these two documents has begun to take shape. The further integration of green building strategies will continue since Standard 189.1 is on  continuous maintenance, meaning the revision process is ongoing, but those further revisions will not affect the 2018-IgCC content.

USGBC Alignment with Green Codes and LEED
Since the initial announcement of the "IgCC powered by 189.1" in 2015, the USGBC has made progress on recognizing the important role of green building codes for voluntary rating systems and LEED certification.

In the summer of 2015, Green Business Certification Inc. (GBCI) announced a package of measures required by California's statewide Green Building Standards Code (CALGreen) that can now be streamlined when a project seeks LEED certification. More streamlining is anticipated in California and, importantly, this breakthrough in aligning code requirements with LEED pioneered an approach that the USGBC can leverage for aligning with forthcoming versions of the IgCC.

Once the technical content of the 2018-IgCC are known (following the handoff from ASHRAE to ICC later this year), the USGBC will undertake an analysis of the measures from the model green code and compare them to LEED requirements. This process will begin while the 2018-IgCC is being codified. The USGBC and GBCI anticipate being able to communicate further progress on alignment at Greenbuild this year.

Promoting the IgCC in 2018
While the publication of the 2018-IgCC in a little over a year will be a milestone achievement, it is only the beginning. In forming the historic agreement among ASHRAE, ICC, AIA, IES and USGBC, these organizations envision a new era of design and construction where green codes become widespread.

To help realize the vision, a concerted effort will begin to actively promote the 2018 model green code with the goal of gaining wide-scale adoption. The details of this promotion are being formed now, but efforts will begin in early 2018.

Additional details of this co-promotion will be announced later this year.