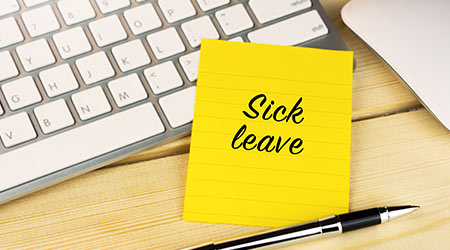 With cold and flu season hitting its stride, many workers across the United States are asking themselves this question: “I’m too sick to work, but I need to pay the bills. What am I to do?”

This quandary resonates the most with works that don’t receive paid sick leave, says a recent survey. Researchers at Florida Atlantic University and Cleveland State University have published a report that shows employees without paid sick leave were 1.59 times more likely than workers with paid sick leave to be “very worried” about their ability to pay monthly bills, according to a story from Bloomberg.

The study was based on a Centers For Disease Control and Prevention survey of 17,800 people — 40 percent of which reported they don’t receive paid sick leave.

The issue of missing out on pay due to sickness is further compiled by the fact more than half of workers in another survey say they are living paycheck to paycheck.

Paid sick leave isn’t an issue in all states. In fact, several states require employers to provide paid sick time to workers. New Jersey, for example, became the 10th in the country to require that its citizens receive this privilege, according to the Asbury Park Press.

Under the state’s Earned Sick Leave Law, workers can use the time to not just stay home while sick, but also to care for a sick family member or to attend a child’s school-related event.

There has been some resistance to government-mandated laws requiring employers to pay their sick workers. In November, a state representative in Texas filed a bill to prevent cities from developing these types of rules. The state’s capital, Austin, passed an ordinance mandating paid sick leave in February, according to a CBS affiliate in Austin.