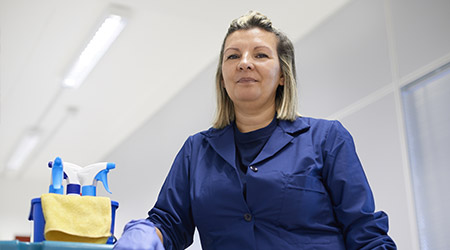 Oregon lawmakers are reviewing a law designed to prevent wage theft and sexual harassment in the janitorial/cleaning industry, according to reports from The Bulletin.

“Our initial concern was we were capturing far too many people under (the original legislation),” Rep. Andrea Salinas, D-Lake Oswego, said in the article.

Salinas is a co-sponsor of the corrective bill that’s working its way through the Oregon Legislature.

“They had included individual employees in the licensing requirement. Then, it was capturing housekeepers. A lot of my colleagues across the state were really nervous about that.”

Salinas supported the law, passed last year, that has since prompted janitorial firms across Oregon to become licensed as labor contractors, similar to what’s required of agriculture and forestry firms.

The Bureau of Labor and Industries, charged with regulating janitorial firms, lists at least seven companies in Central Oregon that have been contacted and begun working toward licensing. Businesses that contract with janitorial services also have liability under the law.

The law that passed last year took effect January 1, but the labor and industries bureau is holding off enforcement to focus on outreach and technical assistance to employers, partly because legislators indicated that the law would be amended this session. One of the original rules — which would be eliminated in the new law — requires anyone who directly employs janitorial labor to submit certified payroll records to the bureau.

Wage theft was the main reason behind the push to regulate janitorial contractors, but the unions realized that their members were vulnerable to sexual abuse and harassment, the article said.

The idea behind the regulations is to create a paper trail, Salinas said in the article. Janitorial workers “just get dropped off at a building at night,” she said. “The worker may go back to the employer, and the employer has shut down shop. With a janitor who works at night, a female janitor, somebody should know where they are physically located.”

Under the new legislation, employers would still have to report the addresses of their job sites, so workers would have some recourse if they aren’t paid, Salinas said.