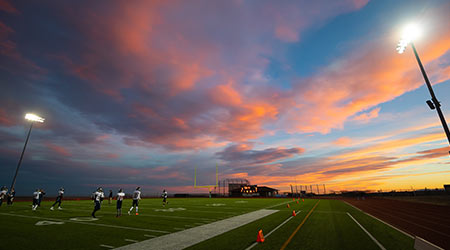 After being named the 2020 Mr. Football for the state of Ohio, Rodger Bacon High School student Corey Kiner used his acceptance speech as an opportunity to thank Jeff Rapking, a school custodian who inspired him throughout his four year high school career.

On days where he was sad or mad, Kiner would look to the school's custodian to put a smile on his face, he told WCPO-TV of Cincinnati. All Rapking would have to say is simply, "There's #22, Corey."

Rapking is known for his more than 35 career as a hard-working, beloved school custodian and for being the biggest fan of Rodger Bacon High School football.

To celebrate Rapking's birthday last year, Kiner gifted him a customized t-shirt that featured Rapking's name and the school's logo. Kiner then had the entire football team sign the special shirt. Then this year, as part of the school tradition where each senior football player gives his jersey to someone special to them, Kiner selected Rapking as his recipient.

On selecting Rapking as the recipient of his jersey, Kiner told WCPO-TV that the beloved custodian was the first person to tell him "Good job" for his on-field performance. The way Kiner saw it, it was only fitting to then let Rapking be #22 now.