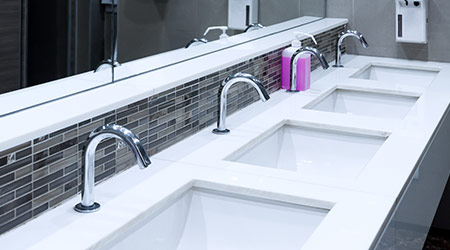 Hand washing is being repeatedly skipped in office buildings around the world. According to a new survey of 5,000 UK office workers by SMC Premier, a UK-based cleaning provider, only 61 percent of respondents wash their hands properly with soap and water after using the restroom. Nearly 20 percent of UK office workers wash their hands for less than the appropriate amount of time.

Sadly, U.S. office workers aren’t role models either. Based on a 2018 survey by Bradley Corp., 56 percent of respondents said they frequently or occasionally see colleagues leave the restroom without washing their hands.

These poor hand hygiene habits can easily lead to the spread of viruses around a workplace. Hand washing is the most effective way to prevent the spread of germs, according to the U.S. Centers for Disease Control and Prevention.

The CDC recommends scrubbing hands for at least 20 seconds.

Without proper procedures such as disinfecting surfaces or having building occupants wash their hands, viruses can spread to half of a building’s population and 56 percent of its surfaces in just four hours, according to a study by Dr. Charles Gerba, a microbiologist at the University of Arizona.