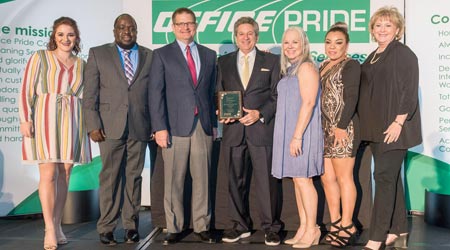 The Office Pride of East Texas team at the 2019 owners' retreat in Chattanooga, Tennessee
Sponsors

Office Pride Commercial Cleaning Services of East Texas has grown from a single franchise 10 years ago to three franchises in Tyler plus a fourth in Longview.

David Stein, the president and area developer of Office Pride of East Texas, is proud of how Office Pride’s presence has grown in East Texas since he first started the business there in May of 2010.

Office Pride of East Texas has consistently been a top performer in the Office Pride franchise system. It received Standards of Excellence Awards, which recognize the Top 10 percent of franchises for promotion of the core values, sales growth and revenue retention, engagement and reporting, in 2012, 2013, 2015, 2016 and 2019. The Tyler franchise also earned Market Growth Awards, which recognize the franchises with the top five revenue increases, in 2011, 2012 and 2015.

Stein’s leadership earned him the Brand Ambassador Award in 2012 and Office Pride’s top individual honor, the Integrity Award, in 2017.

As the business grew over the last decade, Stein has grown his leadership team, also.

Bobby Halbrook joined Office Pride of Tyler in 2013 as general manager and purchased a franchise in 2015.

“Initially, I did not understand how the commercial cleaning industry could or would afford me the opportunity to build relationships with so many people in the East Texas area that I would not have known otherwise,” says Halbrook. “I’ve met some amazing people through Office Pride. I’m so thankful to Office Pride and the people of East Texas.”

Two of the longest-serving members of Stein’s team are Shane Coleman, director of operations, and Debbie Kowalik, director of human resources.

Coleman celebrates 10 years with the company this month.

“The company means so much to me. We have developed a friendship that feels more like a family relationship. We have laughed and cried together, and we hold each other accountable,” says Coleman. “At the end of the day, you just know that you are at the right place.”

Kowalik joined Office Pride of Tyler in 2012 part-time with hopes of going full-time.

“It is the best gift in the world to work for a company that sees your value, believes in your abilities and challenges you to be the best ‘you’ that is possible," she says. "That I can wear blue jeans to work is a plus, also.”

A decade after he launched his business, Stein said he feels fortunate to be able to say he has truly enjoyed his work with Office Pride.

“I love having the opportunity to own my own business and to be part of Office Pride’s amazing faith-based culture,” he says. “Our mission is to ‘Honor God by positively impacting people and workplaces,’ and we are very blessed to get to do that every day.”