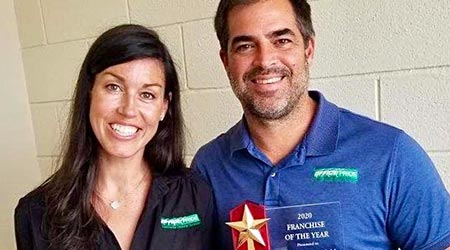 Ashley and Steve Winkle, who own and operate Office Pride Commercial Cleaning Services franchises in Muscle Shoals, Alabama; Birmingham, Alabama; and a new location in Nashville, Tennessee, have been named the national company’s Franchise of the Year.

The Winkles were recognized with the company’s top honors at Office Pride’s annual owners’ retreat, which was held virtually this year for the first time. The Franchisee of the Year Award recognizes the couple and their team for outstanding growth and sales in just three years as franchise owners, says Todd Hopkins, founder, president and CEO of Office Pride, according to a press release. He says that the Winkles have a 90 percent customer retention rate.

Ashley Winkle says the award is very gratifying because it was a reminder to stop and allow yourself to appreciate all that is going well.

“Sometimes you are just so busy, with your head down and doing all the things you need to do, you forget to stop and think, ‘Wow, we have done something good,’” she says. “We are very thankful for this honor.”

The Winkles opened their Muscle Shoals location in 2017 and recorded the highest sales for first-year owners in Office Pride history, earning them Office Pride’s Rookie of the Year honors in 2018. In 2019, they opened Office Pride of Birmingham-Homewood.

In 2019, Franchise Business Review recognized the couple with the Rock Star Franchise Owner title for admirable leadership, business acumen, financial and professional success and contributions to their community.

Ashley and Steve live in the Muscle 5Shoals area with their three sons, Gunnor, Briar and Gaites.