Office Cleaners Across Quebec Threaten To Walk Off Jobs 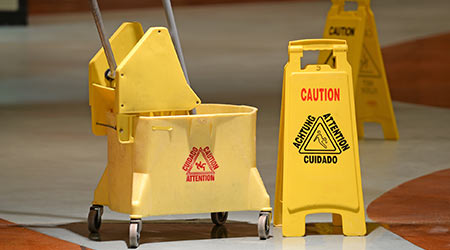 Thousands of workers who clean office buildings, schools and movie theaters in Quebec, Ontario, Canada, are threatening to strike if they don't reach a new collective agreement, according to an article on the CBC website.

More than 6,000 members of local 800 of the Service Employees International Union work for private companies who handle contracts for buildings across Montreal, as well as in Gatineau and Trois-Rivières.

The cleaners are covered by a ruling that guarantees a minimum salary and benefits.

Most cleaners only work 20 to 30 hours a week, primarily in the evenings and at night, said their union president, Raymond Larcher.

The unresolved areas in the negotiations include salaries, vacation days and sick days.

On the other hand, the two sides have been able to find common ground on the issue of greater job protection.

For example, this would ensure a worker can't be transferred from cleaning a building in downtown Montreal to one far away in the suburbs with little notice.

The union fight is part of a larger social movement across North America known as "Justice for Janitors," which has been trying to ensure higher wages in Canadian cities, including Toronto and Halifax, as well as in the United States

The campaign started in 1985 in response to the low wages and minimal healthcare coverage that janitors received. Justice for Janitors includes more than 225,000 janitors in at least 29 cities in the  U.S. and at least four cities in Canada. Members have fought for better wages, better conditions, improved healthcare and full-time opportunities.