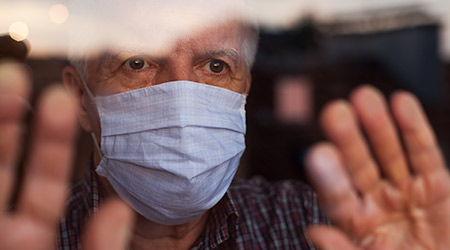 Positive cases of COVID-19 were up nearly 80 percent earlier this summer and continue to rise, according to report reviewed by the Associated Press. The massive rise in cases were primarily caused by outbreaks in the southern and western United States.

Tamara Konetzka, a professor at the University of Chicago who specializes in long-term care, says the numbers shown in the study seem to suggest the problem isn't close to being solved.

One interesting statistic shows that more than 40 percent of COVID-19 deaths were related to long-term care facilities, despite the fact that the people living at these facilities only make up 1 percent of the nation's population.

COVID-19 cases in nursing homes dropped from May to June and remained stable for most of the month. However, cases began to go back up in late June and have steadily rose ever since, according to the American Health Care Association/National Center for Assisted Living's analysis of Centers for Medicare and Medicaid Services data.

Some theorize that outbreaks spread to nursing homes because the people who work there are bringing the infections in with them when they don't know they're infected. Regardless of how the virus is getting to nursing homes, it's certain that cleaning these facilities properly is just about as important as ever.