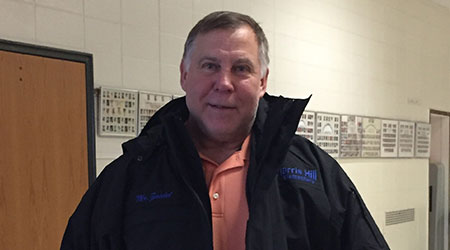 For Mark Zaidel, janitor at Harris Hill Elementary School in Clarence, New York, the days can start as early as 4 a.m. But no matter when his day starts, his focus is the same: creating a safe environment for the kids.

NBC WGRZ reported that Zaibel's dedication is what inspired some parents, along with the Harris principal, to nominate “Mr. Z” for the Cintas Janitor of the Year honor.

According to the nomination, Zaidel, wears many hats throughout the school year,  including some silly ones – just to make the kids laugh.

“From dressing up as Santa Claus during the school’s annual holiday concert to wearing a funny cowboy hat while mowing the grass, Mr. Z always knows how to put a smile on a student’s face. When a blizzard hits, Mr. Z is the first person to act, paving paths for little feet to enter the school safe and sound. And when a child loses a tooth at school, and misplaces it, Mr. Z puts on his Tooth Fairy hat and comes to the rescue with a pouch of cool shark teeth he keeps on hand.“

The 2018 Janitor of the Year winner will be determined by the number of votes and will receive a $5,000 cash prize along with $5,000 in products and services for his or her school from Cintas and Rubbermaid Commercial Products – not to mention bragging rights. A $500 cash prize will be awarded to each of the remaining nine finalists.

Voting for the contest ends on April 20. The janitor with the most votes will win. Those interested in voting can do so once a day, every day, until the April 20 deadline.