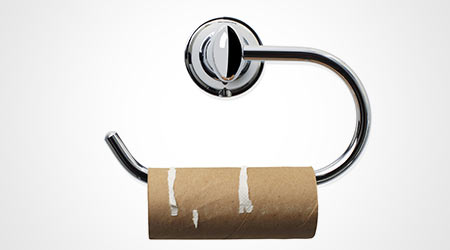 Designed for places that don’t have indoor plumbing, the change:WATER toilet sucks the water out of waste so it’s more compact, more sanitary and easier to dispose of, according to a Fast Company article.

The new invention looks like a traditional toilet sitting on a box with a side vent. Inside, there’s a collection drum that’s lined with a pouch made from a proprietary moisture-wicking polymer.

As excrement goes in, the polymer sucks the water out, dehydrating the sewage while releasing water vapor. The process isn’t odor-free, but it does lessen the smell, according to the article.

“This would be a way to have, essentially, a self-flushing toilet,” said Diana Yousef, inventor. “We lovingly call this material ‘shrink wrap for crap.'”

The company, which incorporated in 2015, has built and tested a prototype.

This spring, change:WATER will partner with Community Rebuilds, a nonprofit that builds sustainable housing for low-income and Native American communities, It will be testing between 10 and 20 units at households in Moab, and the Hopi Indian Reservation. Other international aid organizations have expressed interest.

The toilets, which could be built with different capacities based on whether they’re installed in a private home versus a public restroom, are expected to cost between $200 and $350.

Yousef’s concept is a finalist for the Cartier Women’s Initiative Awards. This month, she’ll be pitching it to an international jury for up to $100,000 in funding.