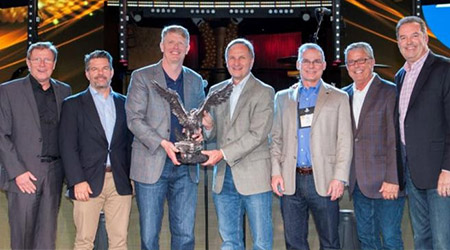 The festivities kicked off with a Solid Gold Welcome Reception honoring the event's nearly 100 participating suppliers. In commemoration of NETWORK's 50th Anniversary the organization presented a Golden Eagle Award to three prominent supplier partners. The Golden Eagle Award acknowledged suppliers that, through years of engagement and impressive results, have earned the NETWORK Supplier of the Year Award multiple times. Those honorees were Georgia-Pacific Professional, GOJO Industries, and Novolex-Heritage Bag.

During the event, NETWORK also recognized 15 suppliers whose success with the organization spans more than 30 years. Commitment and support from these and all of NETWORK's suppliers have contributed to the company's growth and position of strength in an evolving industry.

As part of NETWORK's traditional Trade Show format, the company acknowledged suppliers for exceptional annual performance in the previous year.

2017 Supplier of the Year Award was presented to GOJO Industries for outstanding growth, collaboration, and support of NETWORK and its distributors.

Spartan Chemical was presented with the Member Choice Award in recognition of best all-around service, as voted by NETWORK distributors. This marks Spartan's third year receiving this award, a true testament to the company's long standing commitment to mutual success.

Two organizations were celebrated for Corporate Account Supplier of the Year Award. Diversey and Essity were recognized as manufacturer partners highly engaged in cooperative selling, solid sales alignment, and a strong position with NETWORK's distributor base.

Inteplast Group was awarded the NP&PC Supplier of the Year in recognition of its outstanding support and participation in NP&PC supplier programs.

"In 2018, NETWORK marks five decades of strength and growth," commented Alan Tomblin, Chief Executive Officer at NETWORK. "The enduring commitment and connectivity demonstrated by our supplier partners ensures that together we can continue getting stronger for another fifty years."