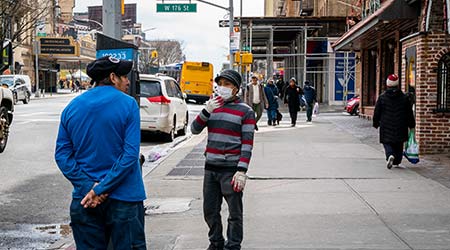 Frontline workers are risking a great deal right now just by showing up to work. This is especially true in New York, the epicenter of COVID-19 in the United States and a city where nearly one in five frontline staff aren't citizens, thus leaving them vulnerable to legal issues.

Scott Stringer, the comptroller for the city, says some 19 percent of all frontline workers in New York are not only risking getting COVID-19 while working long, stressful hours, but they're also facing possible deportation at the hands of ICE, reports New York Daily News. The risk is even higher for janitorial workers, as more than a third of these laborers are believed to be non-citizens.

Stringer is asking that a "basic social safety net" be granted to the city's frontline workers to offset the risk they're putting themselves in by simply working. This relief, he says, should shield the workers of federal restrictions and provide free healthcare. He also believes free child care should be granted to these workers, which could be a massive assist considering nearly half of these people are women and half have children.