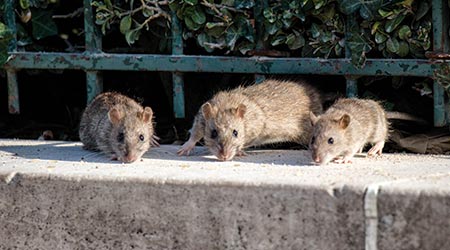 Dry ice is a new unlikely weapon in New York City’s battle against rats, according to an article on The Straits Times website.

The city’s sanitation department locates the entrances to the burrows and drops small pellets of dry ice (carbon dioxide in solid form). The warmer air temperature makes the carbon dioxide revert to gaseous form and asphyxiates the rats.

The director of pest control for the New York City Health Department commented that this method is most effective in green spaces and parks because it is too complicated to identify rat tunnels under concrete. He also stresses that the new method exterminates between 90 and 100 percent of the rodents, and the dry ice presents no risk to wildlife in parks and public gardens.

New York launched the dry ice offensive at the beginning of the year, joining Boston, Chicago and Washington. But officials stress that the best way to deal with the rats is still to eliminate their food source.

Facilities that eliminate or minimize trash will force rats to seek food elsewhere, reducing the need for poisons.

According to reports, winter will force rats and other pets to search for food sources and shelter inside buildings, so it is important to conduct regular inspections of a building’s interior for any signs of a pest infestation.