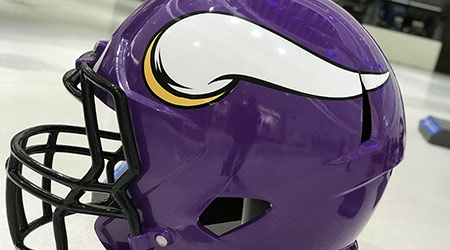 In an ironic twist that's probably an adequate representation of 2020 as a whole, the man appointed to protect a National Football League franchise from COVID-19 has tested positive for the virus.

Longtime Minnesota Vikings Athletic Trainer Eric Sugarman and members of his family tested positive for COVID-19 and are all demonstrating mild symptoms, reports the Twin Cities Pioneer Press. Each NFL team is required by the league to name an infection control officer prior to the 2020 season and the Vikings selected Sugarman as that individual this summer.

Sugarman isn't the only person within the organization to be suffering with a COVID-19 scare right now. Justin Jefferson, whom the Vikings drafted in the first round of the 2020 NFL draft, has been placed on the team's COVID-19 reserve list. Jefferson is joined by fellow rookies Blake Brandel, Brian Cole and Tyler Higby. Players put on the list have either tested positive for COVID-19 or have been in close contact with someone who tested positive. NFL teams are not required by the league to announce which players tested positive and which players are being quarantined as a precaution. The Vikings say none of the players on the list contracted COVID-19 from Sugarman.

News of the COVID-19 issues surrounding the Vikings comes the same week that several players on Major League Baseball's Miami Marlins tested positive for the virus. So far, there have been 17 reported cases of COVID-19 within the Marlins' clubhouse, reports CBS Sports.