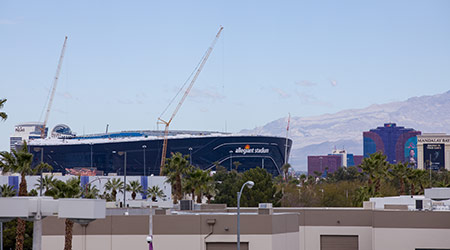 The NFL's famed Raiders franchise is moving out of California for the first time in its history in favor of a city that certainly matches its culture: Las Vegas. And while the team hasn't yet taken the field at its new home in Sin City, it is known that the toilets and Allegiant Stadium are ready for game day.

At a capacity crowd, the new Raiders stadium would be welcoming 65,000 fans on Sundays. To accommodate the crowd, the stadium offers 1,430 toilets and urinals which figure to be heavily used. To ensure that the toilets can withstand all of the between-quarter and halftime flushing, stadium workers held a mass flushing even, reports Las Vegas Review-Journal.

The test, which was passed, absolutely needed to happen. The state of the art stadium is less than two months from completion and there's still a possibility that NFL games will be played in front of fans this year. The last think anyone wants, according to a member of the stadium construction team, is for the plumbing to fail tens of thousands of full bladders.