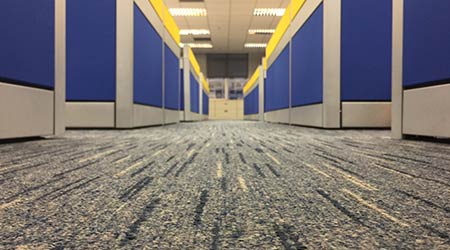 First impressions start from the ground up, according to new research put forth by Whittaker, a Pennsylvania -based company devoted to low-moisture carpet cleaning.

The survey of U.S. adults — conducted online by The Harris Poll on behalf of Whittaker in late March — found that 93 percent of Americans say dirty carpet with things like stains, animal hair or food residue in a facility would negatively impact their perception of that business or organization.

“Whether it’s a retail store, hotel, school, long-term care facility or another type of building, customers, prospective employees, students and residents are observant of the way facilities maintain their interiors,” says Joe Bshero, director of technical services at Whittaker. “This research demonstrates just how important it is for facilities to ensure a good first impression by properly maintaining carpet.”

The research details which types of facilities could be most impacted by carpet neglect. Dirty carpet in a hotel would negatively impact  the perception 80 percent of Americans’ had of the business, while 72 percent would think adversely about a long-term care facility with dirty carpet. Apartment and condo common areas with dirty carpet would adversely influence the perceptions of 70 percent of Americans of that type of facility. Meanwhile, dirty carpet would negatively impact more than half of Americans’ perceptions of retail stores (66 percent), office buildings (64 percent), and schools and universities (58 percent).

The survey also detailed which actions Americans would take as a result of encountering unkempt carpet. More than half of Americans (58 percent) would assume the facility is not clean, while 56 percent would look for an alternative facility to use or go to and half  would spend less time in the facility. Additionally, 47 percent of Americans would tell friends, family or colleagues about the lack of cleanliness in the facility. These actions can gravely impact profitability and an organization’s long-term success.

“A thorough carpet care program that utilizes low-moisture encapsulation machines and high-quality chemistry allows facilities to maintain consistently cleaner carpet,” says Bshero. “Not only does stain-free carpet look more welcoming, it has the power to help organizations uphold their reputation and keep people frequenting their buildings.”