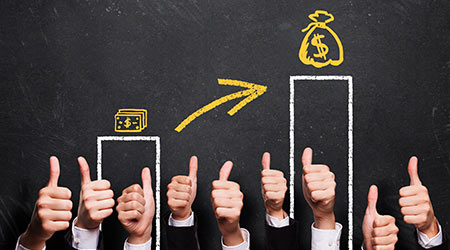 It has been almost nine years since Illinois addressed the minimum wage debate. In 2010, lawmakers raised the state minimum to $8.25, and today, roughly 1.4 million residents make less than $15 an hour. This will soon change.

Low-wage workers across Illinois will soon receive an annual $1-per-hour raise, thanks to a new law increasing the state’s minimum to $15 per hour by 2025. According to the Chicago Tribune, the law makes Illinois one of the first states to approve a minimum wage of $15 per hour, a goal set by the labor-backed Fight for $15 movement.

Expected to follow suit, California will hit that level in 2022, Massachusetts in 2023 and New Jersey in 2024. It is also estimated that New York’s minimum wage eventually will reach $15 per hour statewide through a series of increases tied to inflation.

These are just a few examples of the 19 states that are expected to increase their minimum wage requirements for workers in 2019. In 2018, according to Paycor, Alaska, Florida, Minnesota, Missouri, Montana, New Jersey, Ohio and South Dakota all raised their rates based on cost of living, while eleven states — including Arizona, California, Colorado, Hawaii, Maine, Michigan, New York, Rhode Island, Vermont and Washington — raised their rates because of previously approved legislation or ballot initiatives.

The laws are good news for low-wage workers, but small-business owners aren't as excited.

Building service contractors facing shrinking profit margins typically adjust to increases in labor with higher cleaning costs for clients. According to one Contracting Profits article, this often results in a reduction in cleaning frequencies so facilities can stay within budget — a loss for cleaning contractors.

To help offset some of this, Chicago Tribune reports that the law also creates a tax credit to help businesses with 50 or fewer employees. Employers will be able to claim a tax credit for 25 percent of the cost in 2020, and the credit will scale back annually, then eventually phase out.

That tax credit will help, but even so, not all business owners believe the minimum wage increase will have a negative impact on operations. According to a second Contracting Profits article, some owners believe it will help recruitment efforts for cleaning staff.