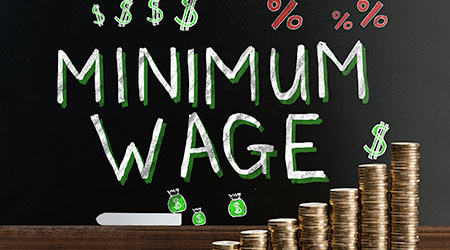 A recent article from The Employment Policies Institute (EPI) highlighted the 18 minimum wage increases that went into effect on July 1. These increases include two states, the District of Columbia, and 15 other localities spanning across the entire country.

This might sound like good news for workers in Maryland and Oregon, as well as the 10 California cities and counties that saw hikes. But EPI reports that the increase in labor costs could lead to business closure, lost job opportunities or reduced work hours. In fact, a recent study estimated that when California’s statewide $15 minimum wage is fully phased-in in 2022, roughly 400,000 jobs could be lost.

“Business owners and employees will face a bummer summer thanks to the consequences of new wage mandates. Empirical evidence shows that wage hikes reduce workplace opportunities, either by reducing the number of jobs or by forcing businesses to close.”

In a CleanLink Q&A,  business leaders come down on both sides of the minimum wage issue when asked whether it would make it harder to recruit janitors away from other industries.

• Laurie Sewell, president and CEO, Servicon Systems, Inc., Culver City, California: "No, we don’t believe it will have a big impact, because we will all be on a level playing field with pay."

• Eric Luke, president and CEO, Varsity Facility Services, Salt Lake City: "The $15 minimum wage might initially make it easier to recruit janitors away from some industries, as that wage rate will be very close and competitive to some other non-janitorial hourly jobs in the economy. But in the intermediate and long term, the economy and labor markets will adjust to the cost of doing business, and I see this having no long term impact on the recruitment of frontline employees."

• Mary Miller, owner and CEO, JANCOA, Cincinnati: "Yes! It will make it worse, because a lot of other jobs will be paying the same rate. It will create a bigger pool of competition for employees for all industries."