Mass. Town To Be First In US To Require Tampons In Public Bathrooms 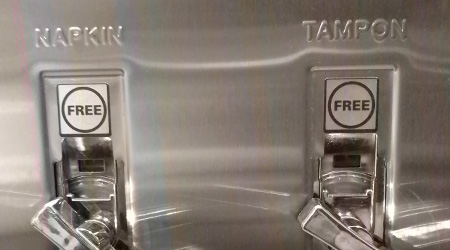 Brookline, Massachusetts, might become the first municipality in the U.S. to require complementary tampons and other menstrual hygiene products in all its public bathrooms. The initiative was introduced during a recent Town Meeting where residents pointed out that toilet paper is required in all restrooms because of public hygiene laws, but officials previously considered tampons and pads "luxury items."

Brookline Patch reported a response to that concept from a meeting attendee: "Imagine if you had to always keep a roll of toilet paper on you in the event you had to go to the bathroom unexpectedly away from home. Just like it's not sanitary to use the bathroom without [toilet paper], tampons and pads are critical to women's health."

The argument was not just to simply provide access to the products, but to make them available and free. According to Patch reports, town officials unanimously supported the initiative, which will be adopted no later than July 1, 2021.

Dispensary machines will be installed in women's, men's and family public restrooms in all city buildings — Town Hall, public libraries, town comfort stations and restrooms at the health department and parks and recreation. Anyone who was born female will have access to the menstrual products.

As to the cost of such a program, officials are prepared to spread out the estimated $40,000 expense over several budget cycles to get the initiative up and running. Once implemented, there will be an estimated $7,300 maintenance fee billed to the town.

Although Brookline might be the first public area implementing a program like this, the concept is not a new one. According to previous reports, there are already varying laws in New York, California and Illinois requiring availability of free menstrual products.