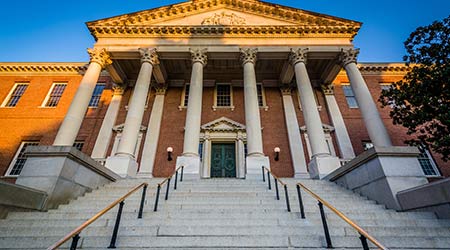 The white trim on the Maryland State House in Annapolis has developed a coating of biofilm — a combination of microorganisms that can include bacteria, algae and fungus — and the building staff may turn to lasers to eradicate it, according to an article on the  Capital Gazette website.

The grime has long frustrated facilities professionals because it seems to be an unstoppable force. According to scientists, you might be able to clean it, but you’ll never wipe it out.

Pending funding approval, the Maryland Department of General Services will hire a contractor — armed with lasers — to clean black carbon and biofilm.

The estimated $385,000 project will be the most thorough cleaning the facade has received in nearly two decades.

Once biofilms attach to a surface, they start spreading and producing a coating that protects the microorganisms. Some researchers believe biofilm could be eating away at surfaces, others belief it's harmless. In the past, acids or blasting media have been used to try to eliminate it, but those methods can be harmful.

Chicago-based Conservation of Sculpture and Objects Studio uses laser equipment calibrated to remove pollution without penetrating stone. Infrared light penetrates the darker layer of gunk and “excites” the particles, evaporating the grime. The cleaners then use distilled-water steam to lift stains.

The company recently used lasers to restore the marble facade of the U.S. Supreme Court. It also conducted a test on a patch of the Jefferson Memorial dome.

But no matter how thorough the cleaning, scientists say biofilm will always come back. The microorganisms are floating in the air and, eventually, they reattach.