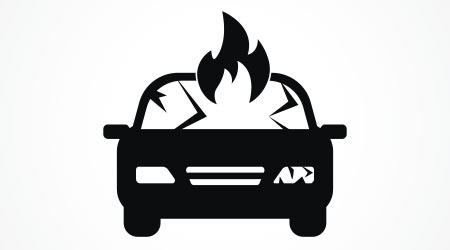 Most people have enough common sense to not smoke while filling up their vehicle with gas. One would hope that all people would also know enough not to sit in their vehicle and apply hand sanitizer while smoking, but a recent car fire proves that not everyone uses their head.

A man driving in Montgomery County, Maryland suffered first and second degree burns on his hands and thighs after the combination of his lit cigarette and hand sanitizer caused the vehicle he was in to catch fire, reports WTOP News.

According to local officials, the fire started around 5:30 p.m. on March 14 in the parking lot of a shopping center. Those officials said the impressive fire started when the embers from the cigarette that the man was smoking fell into his hand, which was full of hand sanitizer.

Luckily, the driver was able to escape the vehicle with the non-life threatening burns before the entire vehicle was engulfed by towering flames.

Images of the car fire can be found here in WTOP News' story.